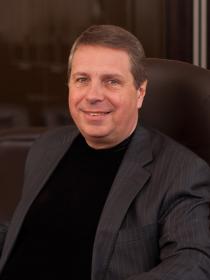 Full Member of the Academy of Engineering Sciences of Ukraine,
Doctor of Technical Sciences, Professor, Honored Worker of Education of Ukraine.

In 1971, I entered the Odessa Polytechnic Institute (PIU), graduating in 1976 with a degree in Mechanical Engineering, Metal Cutting Machines and Tools.

After graduation she worked as an engineer, junior researcher at this educational institution.

Since 1982, the assistant of the department "Technology of Machine-Building" OPI.

In 1985 he defended his candidate's thesis, since 1988 – assistant professor. In 1990–1991 – deputy dean of the faculty, from 1991 to 1996 – dean of the Faculty of Mechanics and Technology, from 1996 to 2000 – Director of the Institute of Industrial Technologies, Design and Management. Since 2000 – Vice-Rector for educational, scientific and pedagogical activity and personnel and economic issues. Since 1996 – Head of the department "Metal-cutting machine tools, metrology and certification". In 1998, he was awarded the title of professor, in 2006 he defended his doctoral dissertation and received a doctorate in technical sciences.

A renowned specialist in the field of dynamics and reliability of technological systems. He trained Doctors of Science and 4 Ph.D., directed postgraduates, published more than 150 scientific papers, including patents, monographs, textbooks and manuals.